One of the good things about it raining almost every day this month.

Pulling stuff (in this instance the vacuum cleaner) apart to put it back together. Fun?! 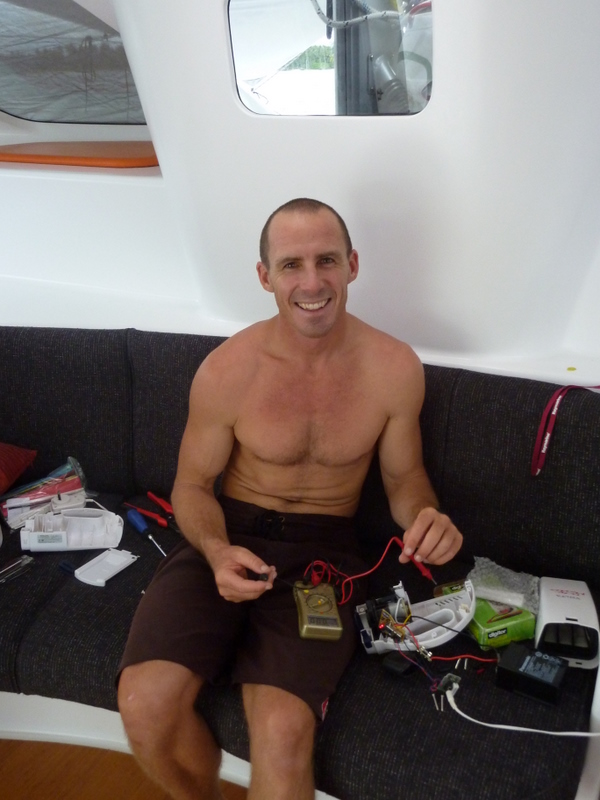 Six things we have learned

1. In Padang, store owners hide their tins of beetroot from the police. If you say the magic word “beetroot” they may smuggle you a few tins from out the back.
2. Basic medical care and drugs are super cheap in Indonesia. For example, consultation with doctor + dose of painkillers + dose of antibiotics = $4 (about the cost of three packets of cigarettes). People have money for cigarettes but moan to us that they cannot afford to see a doctor. Hmmmm.
3. If you use more than five swear words in a sentence it means (a) you have a poor vocabulary and (b) you are a bogan. Charter boat captains and guests you know who you are.
4. The chefs at the resorts and on the charter boats in the Mentawais serve the best food in the world; so we hear. In the line up we hear more frothing about food than about surf. Perhaps not surprisingly, most bellies out there are bigger than that of a pregnant lady in her second trimester (i.e., the first mate’s).
5. When beating into 10-15 knots of wind:
*One side hatch left open in the port hull = a two inch deep salt water pond in the guest cabin.
*One easiyo yoghurt maker left on the bench in the kitchen = a ruined batch of strawberry yoghurt + a broken yoghurt maker.
6. The skipper is becoming a book snob – using words such as “charming” to describe enjoyable reads and poo pooing best selling crime fiction as an “airport novel”. The first mate is proud.

Rusdi. Our awesome driver in Padang. Standing by. 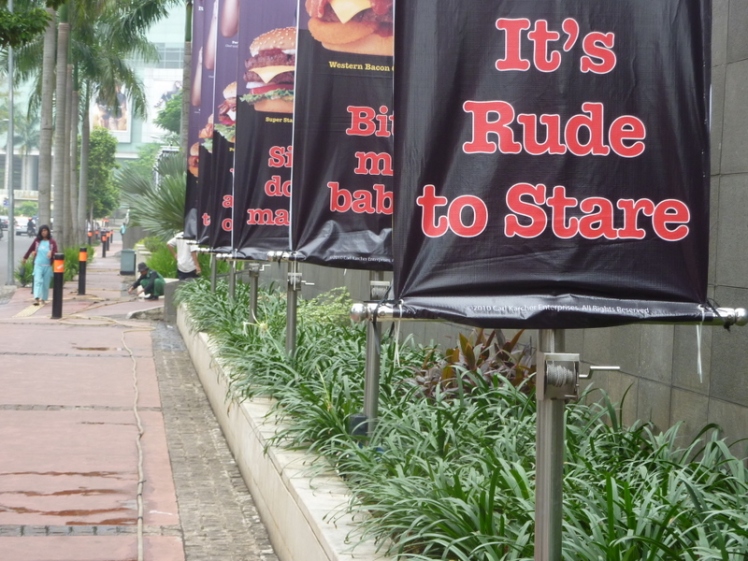 Seven of the best bits

1. Surfing 8HP
*The skipper scored it for three swells this month.
*The skipper loved the 200m+ long gaping barrels.
*The first mate loved that it dragged the bunnies away from “her” waves – Yater and 14 Kevins – leaving the line ups empty. Interestingly (and fortunately for the skipper), most of the bunnies were too scared to catch waves at 8HP. Though they seemed happy enough paddling around in awe of the thumping waves.
2. Long inside showers: One of the good things about it raining almost every day this month.
3. Nasi bungkus (literally “wrap up the rice”): Take away food from restaurants in Padang and Tua Paget. Yum. Much better than dining-in unless you particularly want to dine in a sea of spit and in a cloud of cigarette smoke.
4. Unsolicited belly rubs from strangers: The first mate was warned about this. She expected to hate this. She (and the parasite) LOVE this. The more socialising the parasite does (and the earlier) the better.
5. The perfect Padang provisioning/parasite check up/renew visa run: We left the Mentawais on the last day of a swell. We arrived back in the Mentawais on the first day of the next swell. We missed a few days of bad weather and flat surf.
6. Rusdi: Our taxi driver in Padang. Always on stand-by. Always ready to go. He knows all of the spots a cruising sailor would want to visit. If you need a driver in Padang, we recommend Rusdi (Cell phone: 0852 6345 4605).
7. Best item on board in August in the opinion of:
*The skipper – Sikaflex 291. 310ml tube. It kept Zinc’s hatches sealed. It kept the inside of Zinc dry when it rained almost every day this month.
*The first mate – 8 foot surftech tuflite Lauran Yater model. The perfect surf board for the uncoordinated pregnant lady.

Five of the worst bits

1. Bad weather: It rained and stormed and the wind howled from the north almost every day. Mind you, this did mean the right handers in the Mentawais were cranking all month.
2. Lion Air: The first mate’s airline black list is getting longer: Jetstar… Philippine Airlines… Lion Air… next?
3. Unsolicited treatments at the barbers: As well as a haircut and a shave, the skipper received a free forehead shave and neck crack.
4. Whistling on VHF16: The skipper wants to throttle whoever taught Indonesian crew on charter boats to use high pitched whistles to attract attention on the VHF radio emergency and calling channel.
5. Charter boats dragging anchor: We have moaned about this every month for the past four months. We are sick of it. The skipper now asks the captains of charter boats that anchor near us the following questions:
*What size and type of anchor do you have?
*What size and type of chain or rope do you have? How much do you put out?
*How often do you drag anchor? In what conditions?
*Is a crew member on watch at night?
Grrrrrrrr. 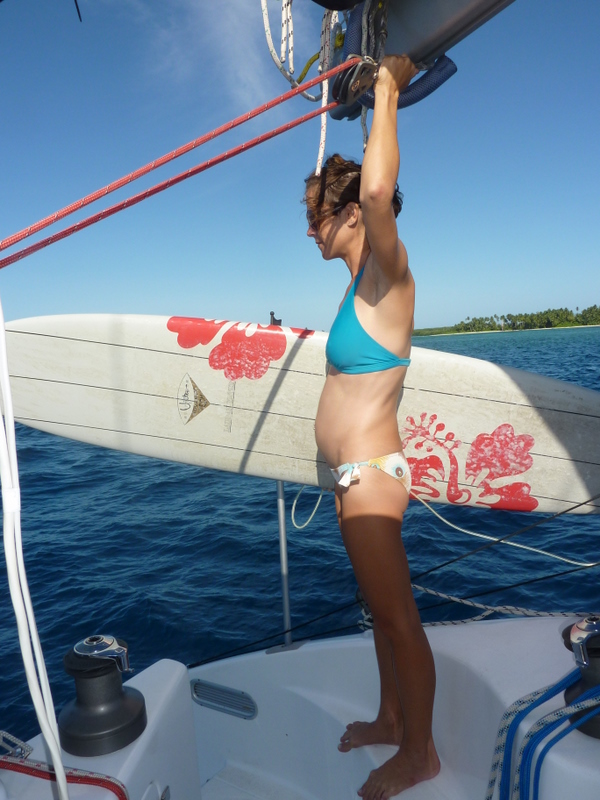 The first mate (& the parasite) on their lonesome in the line-up. 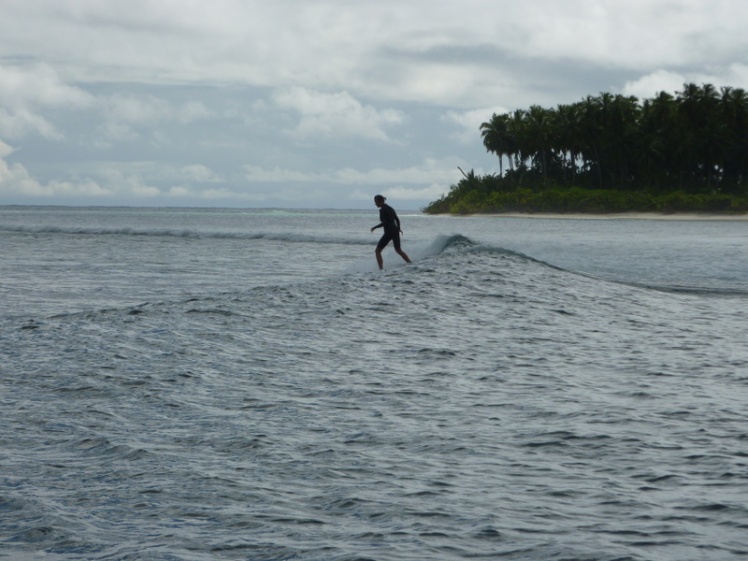 *Exit music : Ian Rankin (1.5 stars) – Airport novel. Boring. Rankin must have become famous by doing a better job in his earlier books.
*The philosophy gym : Stephen Law (3.5 stars) – What is knowledge? Is there a God? What is maths? Now I know the answers to these questions and many more.
*Short history of the world : HG Wells (3.5 stars) – Charming. Interesting summaries of key events that have happened in the world over the past several billion years.

*Salamander : Thomas Wharton (3 stars) – Magical. Zany. For those who love the idea of books and reading.
*Once upon a time in Beirut : Catherine Taylor (3 stars) – About an Australian couple living and working in the Paris of the Middle East. Better than expected.
*East of Eden : John Steinbeck : (4 stars) – Crammed with goodness, badness, beautifulness, ugliness, happiness and sadness.
*The bodysurfers : Robert Drewe (3 stars) – Short stories. The angst of humans juxtaposed against the beauty of the Australian coastline.
*A short history of the world : HG Wells (3.5 stars) – I would love to have met HG. He does not shy from shading history with his opinion, e.g., “It is scarcely an exaggeration to say that at present mankind as a species is demented and that nothing is so urgent upon us as the recovery of mental self control… We call an individual insane if his ruling ideas are so much out of adjustment to his circumstances that he is a danger to himself and others. This definition of insanity seems to cover the entire human species at the present time…” [circa 1945].
*The human stain : Phillip Roth (3 stars) – It sucked me in. It lost me. It started to suck me in again. The tempo was palpable.
*Unaccustomed earth : Jhumpa Lahiri (4 stars) – Short stories. Fresh. Subtly intoxicating and surprising.