Indonesia: the central islands – Lembar (Lombok) to Panaitan Island
And:
*The skipper’s holiday surfing in Sumatra
*The first mate’s holiday away from the sea in central Bali 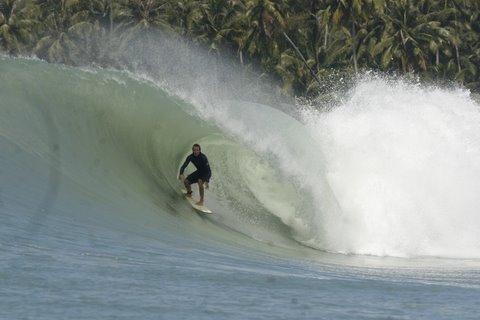 Ten things we have learned

1. Absence makes the heart grow fonder. For a week in September: the skipper flew to Sumatra to surf the swell of the season; the first mate explored inland Bali and lay by the pool at a resort where she could not see, smell, feel, hear or taste the sea; Zinc danced on her swing mooring at Serangan in Bali. When we reunited, we enjoyed each others’ company a little more than we did before we parted.
2. If a policeman says to you: “Whiskey? Rum?”, then say to him (using your elementary bahasa Indonesian): “Tiduk. Terima kasih. Saya tiduk mau whiskey, rum. Saya tiduk suka whiskey, rum [pull face expressing yuck]. Terima kasih banyak. Selamat jalan.[walk away]” [rough translation: No. Thank you but I do not want any whiskey or rum. I do not like it. Thank you very much for the offer though. Good-bye.] The policeman will turn red in the face; his pious friends will giggle and nod at you in approval.
3. Remove rain water from your tender by opening the bung (i.e., plug) and burning around on a plane doing donuts. Counter-intuitive perhaps but it works and is easier (and more fun) than hauling the tender out of the water, especially if your skipper has gone surfing.
4. Remove an Indonesian fisherman from your boat by giving him a packet of cigarettes and telling him your boat is a no-smoking zone. If the first mate is not allowed to smoke on board Zinc, then no-one is; regardless of how much the skipper may want a fisherman who has jumped (uninvited) onto the back step of Zinc to stay on board and chat.
5. Do not visit Ubud alone: there are couples everywhere; there are love songs played everywhere; there are couples singing along to love songs everywhere. Blah.
6. Nusa Lembongan is hectic: massive charter boats, pontoons, day trippers, surfers, divers, snorkellers, watersliders, sun-tanners, glass-bottom boaters, banana riders, jet skiers, paragliders, restaurant and bar goers. This beach resort island may be a place where people go to relax and “get away from it all”, however, the antics there are prone to shock those who have spent the previous month in the quiet eastern islands of the Indonesian archipelago.
7. One dress size fits all… who can fit into the tiniest change room/corner in the tiniest store in Bali.
8. Avoid port towns. Report to authorities only when required to do so. Some Indonesian officials express disappointment when your paperwork is in order. Perhaps presents are preferred to paperwork?
9. Twelve days in Bali is long enough.
10. The August edition of Zinc sailing was “quarantined” by the Chinese internet censors for unknown reasons…. sorry Greg and Tian…. hopefully the September edition will make it through security screening….

Five of the best bits

1. Three new scuba dive tanks. The first mate and her equipment are muscling the skipper and his equipment out of the board room.
2. Bali. Where there is every good, service and comfort a cruising sailor could want, at a discount price. In the perfect cruising world there would be a “Bali” to visit for a day or two every month. Treats include:
*7.5kg of weetbix, 1.25kg of Australian brie and camembert, 1kg of pine nuts, 2kg of dates. [Note: Hardys in Sanur has (or “had” until the first mate cleared the shelves of) these products.]
*Cream baths, pedicures, reflexology, massages, facials, haircuts.
*Taxi drivers who sing you songs to help you learn bahasa Indonesian: “kiri… kanon… kulihat saja… banyak kapal… do-de-do…” [rough translation: left, right, everywhere you look there are many boats]. Random.
*Cooking schools where you can learn how to prepare meals from local produce (e.g., candlenut, galangal, aromatic ginger, turmeric, torch ginger, tamarind, pandan leaf, salam leaf). [Note: The first mate thought the Anika guest house Balinese cooking class in Kuta was good.]
*Mountain retreats with pools and pretty gardens.
*Restaurants and bars and banana lounges on the beach.
3. Grajagan Bay and Rajeg Wesi Bay. Where the Javan jungle meets the sea. Thick vegetation and cliffs falling into the water. Black sand beaches. Clear, black water. Buffalo on the beaches. Quiet fishing villages hidden in the jungle.
4. Grocery shopping at the markets: conducting business with a gaggle of women who giggle, scream, yell, yahoo and thrust their produce at you. Everything costs 1,000 rupiah (about 15 cents): a bag of tomatoes, 1,000 rupiah; a bunch of spinach, 1,000 rupiah; half a cabbage, 1,000 rupiah; one egg, 1,000 rupiah. Fun.
5. Panaitan Island. Surfing, diving, jungle and beach walking. Clean, clear, warm water. Beautiful, isolated, quiet, calm, protected anchorage. 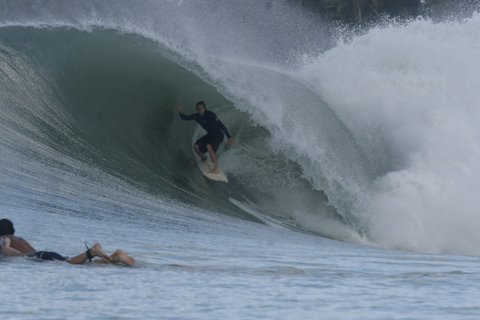 Five of the worst bits

1. The sacred monkey forest sanctuary in Ubud where the first mate was picked on by a nasty monkey. The monkey and the first mate bore their teeth, snarled and flapped their arms at each other until a girl passing by on a scooter rescued the first mate by driving her out of the sanctuary.
2. The relaxing cucumber and honey facial that stopped being relaxing when clumps of cucumber and honey oozed into the first mate‘s eyes, ears and nostrils. The first mate almost drowned. The “beautician” expressed surprise and annoyance when the first mate did not leave a tip.
3. Catching a 20 pound mahi mahi. As the skipper reeled in the mahi mahi, its husband/wife swam beside it… all of the way to the back step of Zinc. The first mate was almost in tears. The skipper removed the lure and threw the mahi mahi back into the sea. We ate beans and rice for dinner.
4. Twelve hours spent scrubbing filthy Bali off Zinc.
5. The passage from Bali to Panaitan Island. Not much wind. Adverse current. We mostly motor-sailed for five days. Slow. Noisy. Tedious. Tiresome.

[Note: the names we have attributed to the above breaks are based on private anecdotes. The number of other surfers in the line-up is shown in square brackets (it does not include us). We did not surf the breaks in the above order…. Good luck trying to work out where they are….]

The skipper asking the white breasted boobie to leave 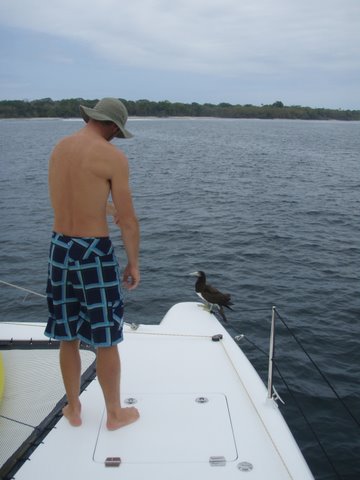 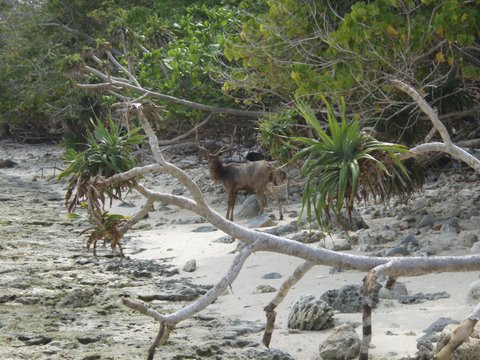