The first mate at the top of the mast

Zinc from up the mast

Seven things we have learned

1. The next time someone asks you how you could afford your boat (perhaps because they think you look like a no-hoper-drop-kick….), you should tell them you paid for it using 15 credit cards and you are leaving the country soon. [For the avoidance of doubt, the part about paying for your boat using 15 credit cards is not true. It is a joke. This disclaimer was drafted and authorised by the lawyer on board Zinc.]
2. The first mate learned how to knit. She was taught by Nana.
3. Eat more raw food and, before you do anything else in the morning, drink a litre of water. For other nutritional tips check out http://www.foodmatters.tv and the DVD “FoodMatters”.
4. After you have speared a fish get out of the water immediately. Refer to “worst bit” #2.
5. With help from the Ibel family, we learned how to set Zinc’s mooring lines so she stopped bashing into the pontoon at the Gladstone marina.
6. The Flints imparted on us many helpful sailing and cruising tips.
7. If you pump 20 litres of petrol into a jerry can with a stated capacity of 22.7 litres, then the can may overflow onto the concrete at the petrol station. The can may continue to overflow onto the mat in the back of your parents car, onto the floor of your mum’s friend’s garage and onto the dive platform on Zinc. The first mate apologises for damage to property.

The first mate and her godson, Zac

Six of the best bits

1. Diving the HMAS Brisbane. Spectacular. Everyone who dives should make this dive a priority [e.g., Sing, May, Jill, Jarrod, Laura]. Everyone else should learn how to dive and then make this dive a priority. Ensure you persuade your dive master to guide you through a penetration of the vessel – i.e., down the chimney into the engine room, up the fire escape, up and down flights of stairs between the decks, through the galley, heads, officers’ mess, instrument room etc. Awesome.
2. Mooloolaba Yacht Club Marina
*Excellent after sale service by Stallion Marine.
*The buzz of people preparing to head north for the cruising season.
*The skipper enjoyed fiddling with bits on boats, visiting chandleries and sharing war stories and ideas with other cruising sailors.
*The first mate enjoyed the view from up the mast.
3. Scenic off-shore route to Gladstone (Fraser Island, Lady Musgrave Island, Fitzroy Reef, Lamont Reef)
*Hooking onto Neilo’s mooring buoy in an isolated fringing coral reef.
*Surfing a perfectly shaped reef break on a glorious sunny day. Only us out.
*Freediving and spearfishing.
4. Fresh fish; including a ten pound spanish mackrel caught and then bludgeoned with a lure and a mallet donated by Chicka.
5. Gladstone
*Family time with the Meldrums and the Johnsons.
*Raiding the organic garden at Eden Street for pumpkin, eggplant, capsicum, and thai basil. Delicious. Thanks garden chef John M.
*Massage. Thanks Juleen and Savy.
*Attending the christening of the first mate’s gorgeous godson Zac.
*Visiting Pat and Jackie at the tackle shop. Walking out with loads of stuff for not much money. Thanks Pat and Jackie.
6. Warmth. The chill has left the air. Zinc and her crew have finally entered the zone within which they operate best: the Tropic of Capricorn to the Tropic of Cancer.

The spoodle on one of her last watches 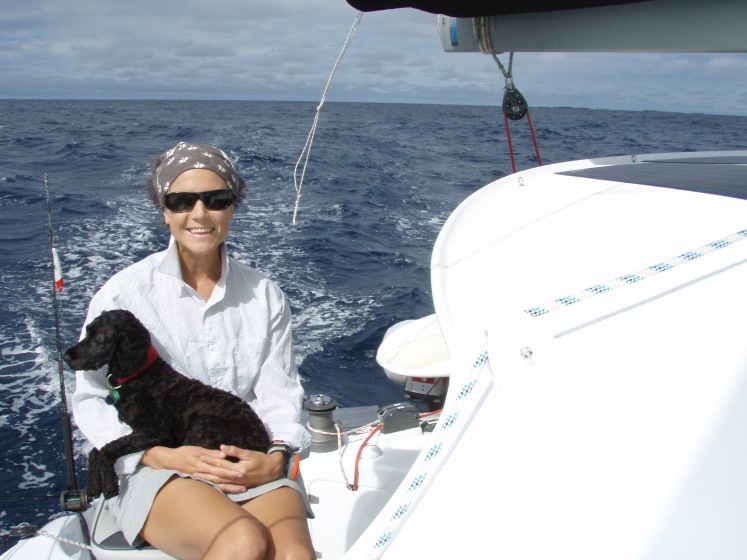 Three of the worst bits

1. The first mate was “recognised” at the dog park in Raby Bay. She was asked “are you the lady who swam after her tender here a few months ago?”
2. Stalked by a six foot white tip reef shark while spearfishing. We suspect the shark wanted our bootie (two sweetlip and one coral trout). The shark followed us up onto a ledge in one meter of water and 100m across the top of the coral bombie. We swam backwards with our flippers and guns pointed at the shark until we lost sight of it and then made our way back to the boat; calmly.
3. Down a crew member. The spoodle is no longer on board. She was handed over to her foster family in Gladstone on 31 May 2009. This was best for the spoodle but not so good for the first mate; many tears were (and continue to be) shed.

*The spoodle partied hard at Michelle’s 30th birthday party: dancing, sniffing, licking, getting pats, doing burnouts through garden beds, chasing/being chased by Jet (apologies Michelle and John for any damage to garden beds). The spoodle spent the next day in bed; hung over.
*The spoodle met a shark; a black tip reef shark. The spoodle did not speak with the shark (like she does with dolphins).
*The spoodle loved visiting Gladstone; a large house and yard to run around; mad aunt Melly (kelpie x) and cranky uncle Cooper (NZ boarder collie) to play with; her grandparents and her new foster family to adore and spoil her.

The spoodle and her new best buddies, Lincoln and Jaz

The spoodle meets a shark

*Point Cartwright
*Balkers (off-shore reef; undisclosed location) (named by the skipper after the first mate who for two hours balked and pulled off the lips of many perfect head high waves because there was live coral barely below the surface. The first mate caught one super fun wave and then paddled back to Zinc. The skipper rode his fair share of spitting barrels.) 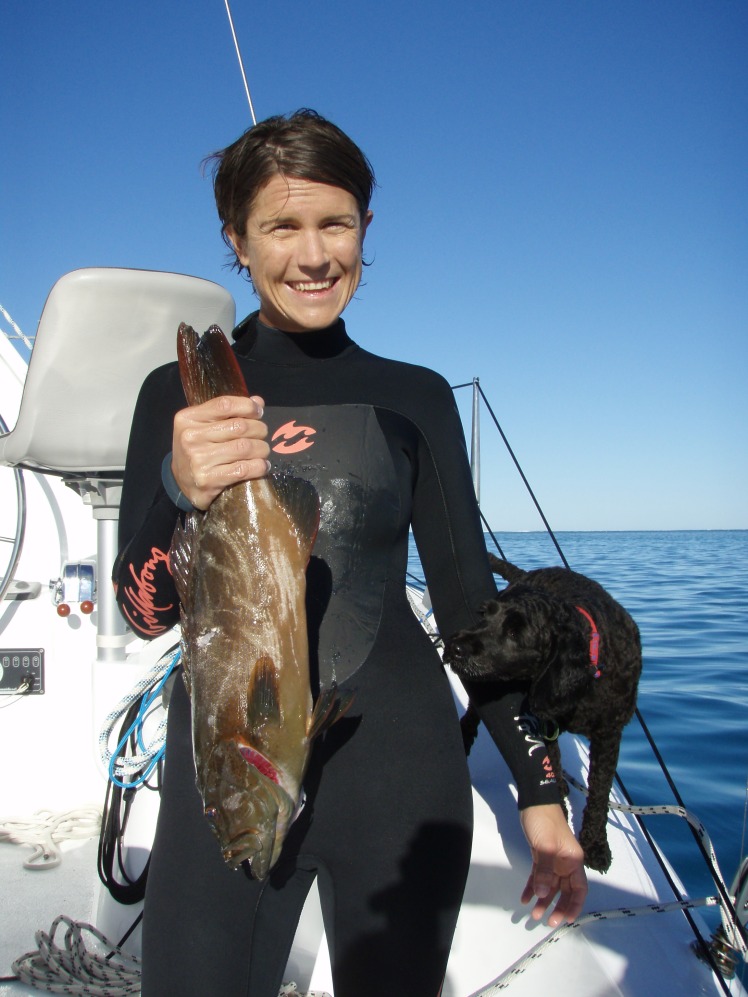