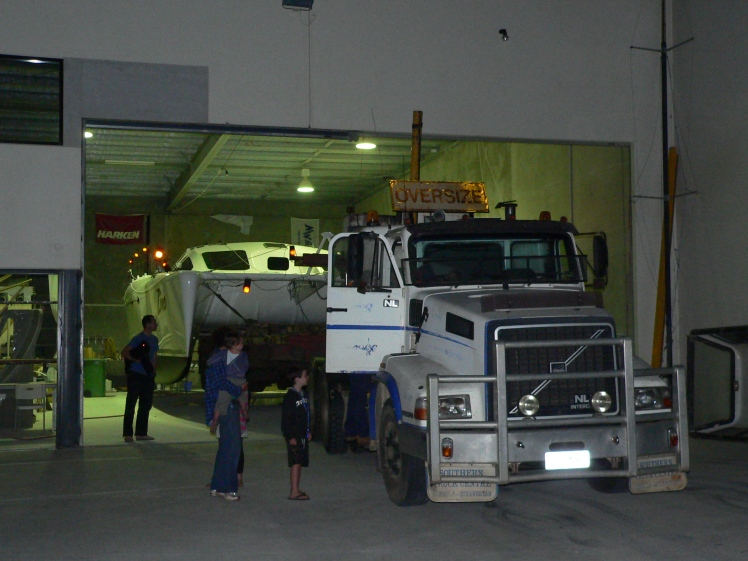 7 things we have learned

1. Insert the bung (i.e., plug) before you drop your tender into the water [Note: Otherwise, the tender will fill with water and to prevent having to explain to your skipper how an expensive piece of cruising equipment sank, you will have to scoop out (quickly and with a small tupperware container) over 500 litres of water.
2. Tie the tender to a tree or other object on the beach when you go to shore. [Note: Otherwise, the tender will float away with an incoming tide and to prevent having to explain to your skipper how an expensive piece of cruising equipment floated away, you will have to-
*swim after the tender in your jogging outfit in a 30 knot off-shore wind until you catch it (approximately 1.5 km)
*clamber into it and drive it to shore to collect the spoodle
*face (and thank) a crowd of people on the beach paused in their Saturday morning constitutional who have called air sea rescue as they could not see you swimming because of the white cap waves and thought you had drowned.]
3. Do not attempt to moor your boat at a marina in strong winds and tides. It is not cool to accidently bounce your fancy new boat off the jetty and into a fancier new boat (your neighbour at the marina).
4. Ensure the end of the anchor chain is connected to your boat before you throw the anchor overboard. [Note: particularly if you have laughed at a story about other people who did not do this.]
5. Sailing can be stressful and scary. Contrary to what the first mate expected, sailing does not always involve sitting in a bean bag on the front deck reading a good book, looking up every so often to watch dolphins dancing.
6. Fit an anchor double the weight recommended for the size of your boat. Boats with the recommended weight of anchor fitted to them can drift backwards in strong winds.
7. Watermelons on a boat are bad luck. An uncut watermelon left on the kitchen bench will fall and break open on the galley floor when you are at sea. An uncut watermelon left on the bed in the spare room for a couple of days will decompose; it will take an entire day’s work to clean and dry the mattress, mattress cover, mattress protector, sheets, doona, doona cover and upholstery. 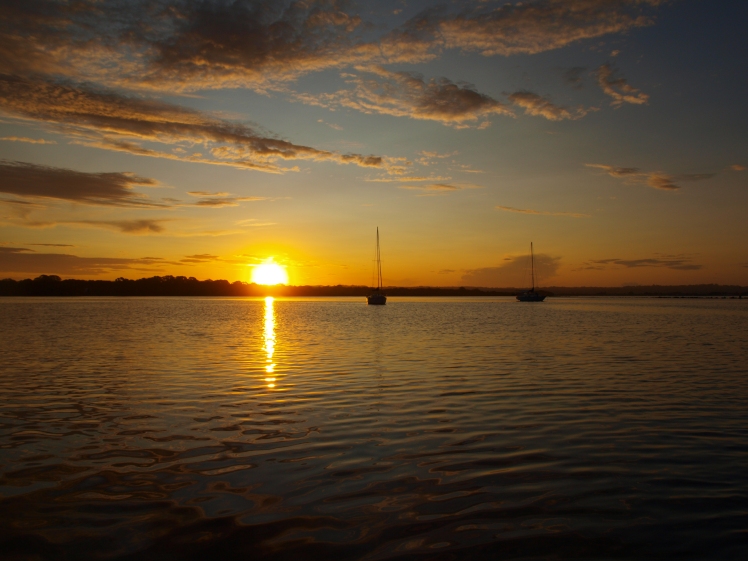 7 of the best bits

1. The launch of Zinc. Following Zinc (loaded on a semi-trailer and with a police escort) down two lanes of the Bruce Highway at 40km an hour; watching her lowered onto the beach; sleeping on her while we waited for the tide to come in; nudging her off the sand; watching her float.
2. Front row seats for the Noosa triathlon fireworks display on our first night living aboard at anchor.
3. Introducing Zinc to our family and friends. Day sails, dinner parties, sunset drinks, brunches, sleep-overs.
4. Meeting new sailing friends. All with helpful advice, encouraging words, inspirational stories, twinkles in their eyes and obvious love of, and respect for, the ocean.
5. Surfing uncrowded waves. Often the line up has comprised solely of the skipper, the first mate and a few dolphins.
6. Our first overnight sail. Yamba to Port Macquarie. The tranquillity of sailing in the dark about 30km off shore. Seeing nothing but dozens of shooting stars, a massive cruise liner (the Queen Mary?), a few massive container ships and flashing lights on the horizon towards land.
7. Sushi meeting pods of dolphins as they swim, jump and play under the trampolines and around the bow. Sushi goes absolutely nuts – tail wagging, standing, jumping, squealing and squawking (new noises for Sushi; as if she speaks with them).

The first mate working on deck

3 of the worst bits

1. The administration required to prepare ourselves and Zinc for a two year trip, e.g., packing up our house, moving the contents into a small storage room, settling affairs and stocking Zinc with supplies, spares and water toys.
2. Hobbling around Moreton Bay and the Gold Coast with one engine waiting for an engine company to fix Zinc’s port engine. The lack of service and general incompetence of the Australian distributor resulted in a minor problem that could (and should) have been fixed within a week taking five weeks to fix.
3. Stink-boat day. This is our new name for a Saturday or a Sunday spent on the Broadwater at the Gold Coast. People driving all varieties of power boats; exceeding the speed limit, doing burnouts, anchoring so close to other boats that cold beers could be passed from cockpit to cockpit, dragging anchor, running into other boats. Also, drunken ladies lifting their bikini tops to show their wares to people in passing boats; drunken blokes generally behaving badly; people throwing rubbish over board; boy racers doing burn outs in the car parks. We now look forward to Mondays.

The skipper working on deck 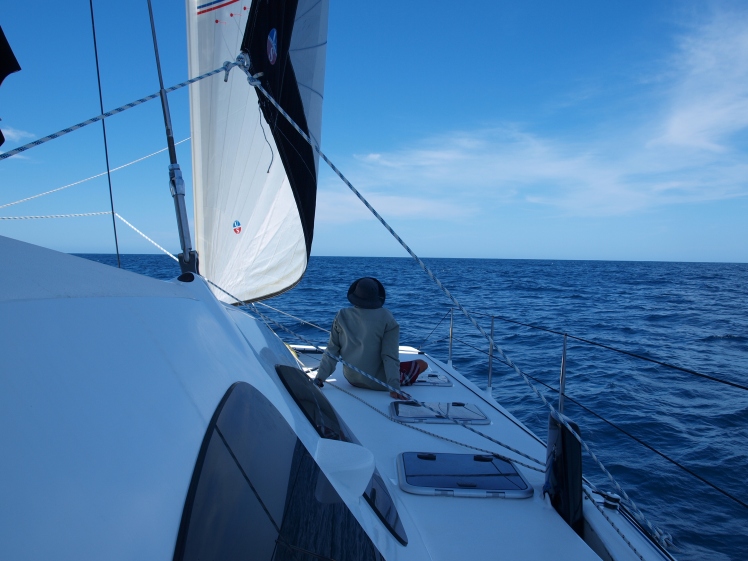 *Sharks. Five. One reef shark swimming around Old Woman Island on the Sunshine Coast. One suspected bull shark jumping out of the water near the southern break wall on the inside of the Tweed River bar entrance. Three suspected bronze whalers 500m off shore from Port Macquarie.
*Turtles.
*Dolphins. Pods of bottlenose and spinner dolphins.
*Schools of stingrays.
*Birds.
*Flat head the size of a human leg.
*Lightning storms. Two scary storms. One at midnight off Moreton Island. The other at sunset in the Clarence River, Yamba. During the latter a bolt of lightning hit the water between Zinc and the shore (we were anchored about 100m off shore). The side flash blew out a couple of little light bulbs, reset the battery monitor and broke the DVD player. 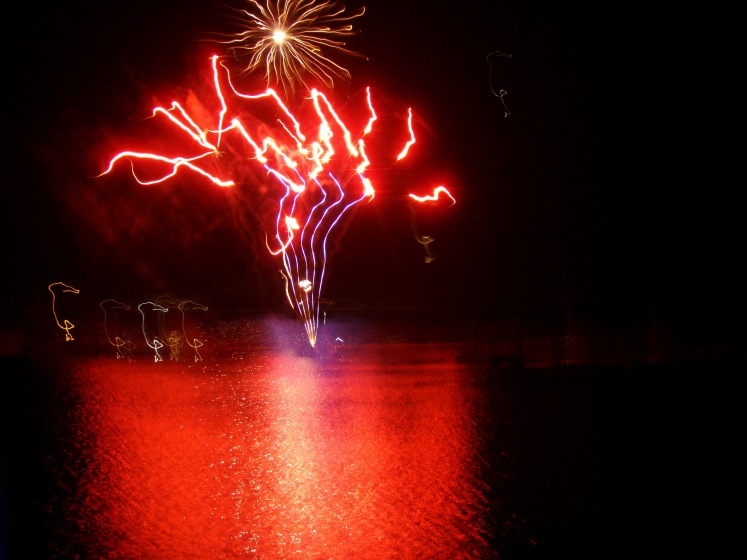 The sun setting before our first overnight sail