Thailand / Vietnam (by air) : Phuket to the Surin Islands
And:
*Our “visa run” to Vietnam

The first mates (Cheers and Zinc). 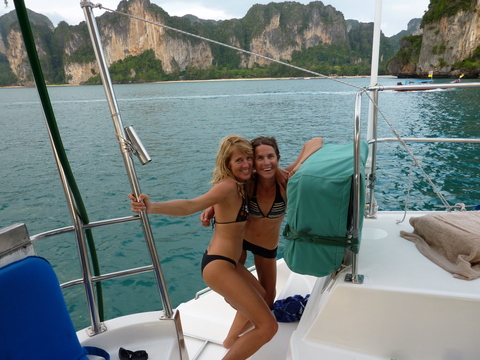 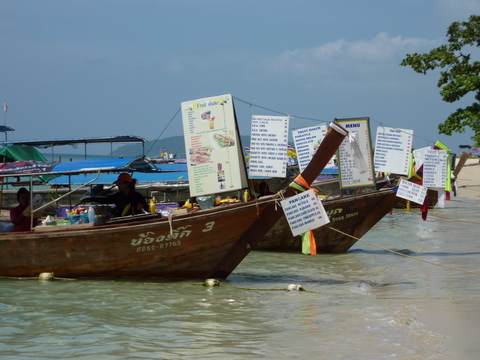 Us at pretty Railay

Seven things we have learned

1. Being on an organised tour is like watching television while at the same time doing a spot of light exercise. On our tour of the Mekong Delta we saw and did many things. We experienced nothing. We were scolded numerous times by our tour guide for tour group misdemeanours such as not watching/waiting/going/sitting/standing/eating/going to the bathroom/getting on/off the bus/boat/bike when ordered. Perhaps our personalities (particularly the first mate’s?) are not well suited to being told when to do things?
2. The skipper is one of “those people”; one of the people the first mate wonders about. What type of person chooses to eat a burger and chips from KFC when there is fresh delicious healthy Thai food available, served in half the time at half the price? The skipper.
3. Do NOT anchor at Ton Sai Bay, Ko Phi Phi Don. We are astonished the cruising pilot/guide books do not say this. If you must visit Phi Phi, then anchor in the bay around the corner (Ao Lohdalum) or at the next island south (Ko Phi Phi Lei). [Note: In our opinion cruising sailors should undertake all measures required to stay as far as possible from the place. It is horrid.]
4. If a rock face that loads of people were climbing all over yesterday is empty today, then there has been a serious rock climbing accident. [Note: The first mate deduced where and how the accident occurred when she reached the top of her climb; saw a voluminous pool of blood spread over several ledges; heard loud yelling and looked up to see an “experienced” climber careering down toward her. Fortunately this time the “experienced” climber stopped before impact with the beginner climber (i.e., the first mate).]
5. At the Similan Islands, charter boat staff will give you the finger if you refuse to let their Miami Vice style speed boat (crammed with over 30 day trippers) raft up with you on a national park mooring buoy. [Note: There was a vacant buoy 200m away. Although, admittedly we would have (selfishly?) refused even had there not been…]
6. People you grew up with in Gladstone could be hiding anywhere; for example in a poky Indian restaurant in a back street of Ho Chi Minh City.
7. The skipper has no natural ability as a fearless rock climber. At the climbing sites we visited on our three day course, the skipper expressed (loudly, forcefully and often) his concerns about the safety of the sport (for example, “Who placed those rusty looking bolts?” “When were they installed?” “What is their ultimate tensile strength?” “I don’t reckon it is enough.” “I’m not going up there.” “These climbing people are crazy” “What is the lateral load bearing capacity of that rock fissure?” “I don’t reckon it is enough.” “That chick cannot hold the tension on that rope if he falls”. Not comments that people 30m+ from the ground want to hear. The first mate spent the three days alternating between ignoring and “shhhing” the skipper.

Sea gypsies go rockclimbing. We were good at tying the knots… [Photo by Toya Louw] 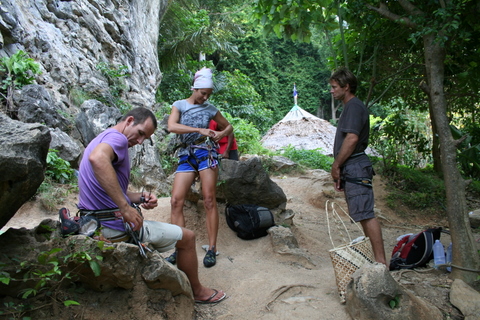 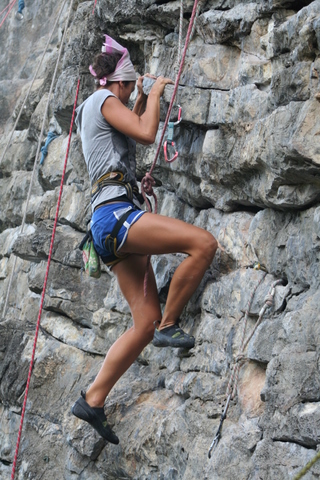 Four of the best bits

1. Onto-it Thailand. Customs, immigration and harbour master offices under the same roof, manned by officials who clearly know what they are doing. Unexpected. Pleasing. [Note: Our first international check-in experience was in Indonesia. There we dealt with numerous officials (some industrious, all confused) over a five day period. We expected all of our check-ins in SE Asia to be like Indonesia… thankfully not.]
2. Playing with our best buddies from the sailing yacht “Cheers”
*Rockclimbing in Railay
*Cooking course in Ao Nang
*Christmas in the Similan Islands
*New Years in the Surin Islands
*Diving and snorkelling in the Similan and Surin Islands
*Fine dining in Phuket
*Drinking (too much?) NZ sauv blanc in all locations
3. Thai boxing classes. The first mate should have taken up punching and kicking the shit out of padded bags and blocks years ago. It is good for her soul.
4. Massage
*Thai-massage (yoga for lazy people)
*Sports massage
*Oil massage
*Aromatherapy massage
*Foot massage
*Head massage
*Reflexology massage
*Face massage
*Hand massage
The first mate considers herself a massage connoisseur. The best massage in Thailand is delivered by the ladies at “Onbeach Relax” in Patong, Phuket. The ear pinch-squeeze-tap move that is prevalent on the beaches around Railay is overrated.

Vietnam: tour group misdemeanour #1 – not walking with the group

Vietnam: tour group misdemeanour #3 – not wanting to wear the hat

Three of the worst bits

1. Another horrible haircut in Asia. It has been six
years since the last. This one is the worst. The first mate looks like lego squirrel.
2. The beach-front restaurants in Railay. We blacklisted five (unfortunate as the food was delicious…):
*One because the beach-door/entrance-boy and his cronies sat on Little Zinc and chuffed away on cigarettes until the first mate stormed out of the restaurant and down the beach to (politely?) ask them to stop. [Note: One of the cronies almost set Little Zinc alight when he threw his ciggie onto the sand and held up his empty hands to show the first mate he was not smoking.]
*One because there is a lady who sings (loudly and badly) at the restaurant each evening; apparently she is “entertainment”.
*One because of terrible service by lady boys.
*Two because the meals cost more than $10 (the skipper likes to remind the first mate we are on a budget).
3. SE Asian inefficiency and confusion at its best… unexpected after our seamless check-in. Perhaps it is us?
*The great department store post-camera-purchase stuff around. 45 minutes spent walking in circles around the store: following attendants from counter to counter to counter; the camera passing from attendant to attendant to attendant; completing forms; receiving receipts; until, exasperated, the skipper grabbed the camera (which of course had been paid for 45 minutes earlier) and ran.
*The great Air Asia buy-one-flight-get-one-free saga. Book and pay for a flight at an AA stand at a shopping center. Receive a “complementary coupon” for a free flight to the same destination. Wait two days (as directed by AA). Scan the coupon and email a copy to AA along with details of the second ticket you want to book (passenger name, preferred date, time etc). Wait five business days for confirmation that the free flight has been booked (as directed by AA). Cross your fingers and hope there are still seats available on the flight you booked at the shopping center or you will be travelling separately to Ho Chi Minh City. When you do not receive confirmation within five business days, telephone AA. Hold for 52 minutes. Speak with an AA operator for 15 minutes. Hang up unsure as to whether the second ticket is booked/confirmed. Email AA. Wait one day. Telephone AA. Hold for 1 hour and 2 minutes. Hang up. Email AA. Telephone AA. Hold for 10 minutes. Receive verbal confirmation that the second ticket is booked (after paying the “taxes” by credit card). Email AA. Wait one day. Receive email confirmation that the second ticket is booked and confirmed. All to “save” $15…. grrrr….
*The great water fiasco. Sourcing 10 x 20L bottles of (drinking) water required: Two visits to the marina office. Three telephone calls to the marina office. One dock side meeting with a marina staff member. One carpark meeting with a random man (we assume – but can not be sure – that he was the water guy). Two more telephone calls to the marina office. Finally after three days…. water! water! water!
*The great missing parcel crisis. A parcel containing spare parts was sent to the skipper care of a rockclimbing school in Railay. [Note: We requested permission to use the school’s mail box address prior to the parcel being sent.] Two days after the day we expected the parcel to arrive we started asking questions… (1) Has the parcel arrived at your mail box? (2) Is there a problem transporting the parcel from your mail box to your office? (3) Can we travel to your mail box to collect the parcel? (4) Yes, you can. (5) No, you cannot. Come back tomorrow. We came back. No parcel. Repeat items (1) to (5) above. Did you say someone’s car is broken? Repeat items (3) to (5) above. Come back tomorrow. No, we are going to travel to your mail box to check if the parcel has arrived. Actually, ahhh… yes, the parcel is on its way here. 30 minutes later… parcel received.
*The great head sail repair mystery. Six telephone calls to a sail repair company. An unmarked “taxi” arrives to collect the sail. Will we see our sail again? Five days later… two more telephone calls to the sail repair company. A trip to the company (which appears to be perhaps the largest sail repair factory in the southern hemisphere?!). Sail received in better than original condition.

The staff on these day tripper boats gave us the finger.

The good ladies Zinc and Cheers. Glorious spot. Word on the yachtie gossip line is the place is no good (for various reasons)… again, (un)helpful, (un)founded information… But good for us; there were no other boats there! [Photo by Toya Louw] 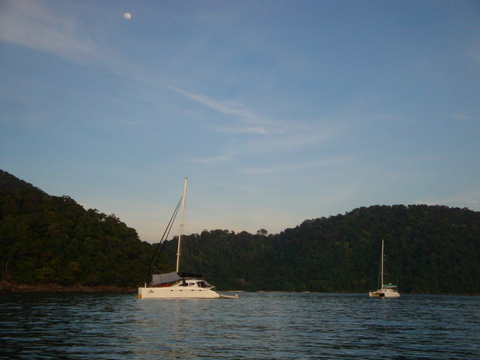 *The dry season. Rain, rain, rain. Every second night a tropical storm on or around us. The locals say this is unusual. We thought we left the wet season in the southern hemisphere…. Climate change?
*Monkeys. 18. Scrambling across a rock face over, under, between climbers. Killing it. No ropes, safety clips, shoes, harnesses. Humans are chumps.
*Lightning storms. Eight.
*Sharks. 13. Reef black tip sharks. In the shallows at Ko Surin Tai. We (unexpectedly) waded past them on our way to shore…
*Moray eels. Two. Both four foot+, fat, with fangs.

Tallfin Batfish and the skipper. [Photo by Steven Louw] 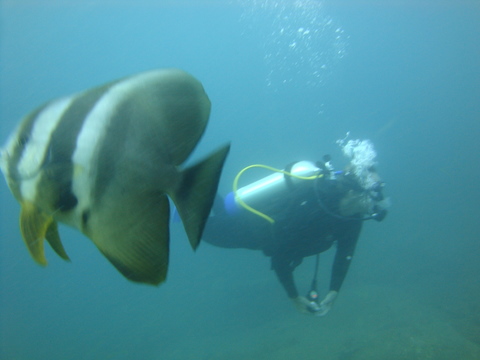 No surf to report.

Staircase to the NYE full moon.

Quiet NYE celebrations on the beach with Cheers and random campers at the Surin Islands. [Photo by Toya Louw] 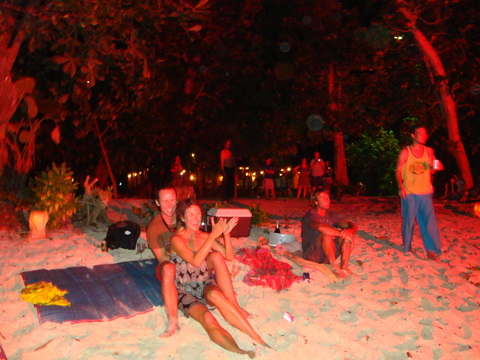 The first mates (Cheers and Zinc) dance in the NY with “flair”. [Photo by Steven Louw]

*Ko Phi Phi Don. Snorkelling: Off the back of Zinc (Ordinary. Life threatening due to thousands (possibly an exaggeration but at least hundreds) of motorised water vehicles of all descriptions and sizes racing around the anchorage.)
*Similan Islands. Snorkelling: Ko Bangu, Ko Bon, Ko Tachai (Reputably one of the best diving destinations in the world. We think this claim is debatable. Perhaps we are spoilt divers? Very good though. Average visibility. Coral walls. Huge granite boulders overgrown with coral and algae. Caves. Swim throughs. A variety and abundance of small sea creatures [Note: The big sea creatures are available for viewing on the tables of tourist restaurants in Phuket courtesy of the hundreds of commercial fishing boats circling the islands.] Crowded with divers on live aboard dive charters and day tripper snorkellers from Phuket and the mainland.)
*Surin Islands. Snorkelling: Ko Surin Nua, Ko Surin Tai, Castle Rock (Very good. Average visibility. Well developed coral reefs. The shallower the better for visibility and variety of corals. As with the Similans small sea creatures only. Not as crowded as the Similans.) Scuba diving: Castle Rock (Surprisingly good due to poor visibility at greater depths. There is a natural arch of boulders covered in vibrantly coloured sea fans that you can swim through, parting a curtain of pretty little pink and orange fish and dodging vicious lionfish as you go. Psychedelic!)