The skipper + our buddies on holidays with the San Souci charter boat. 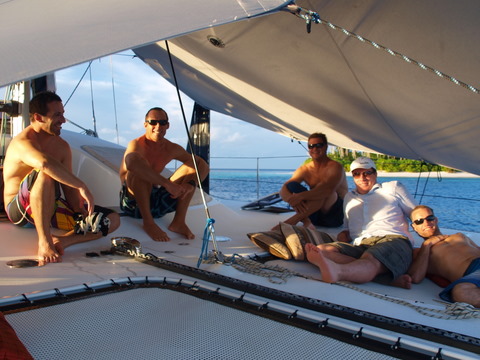 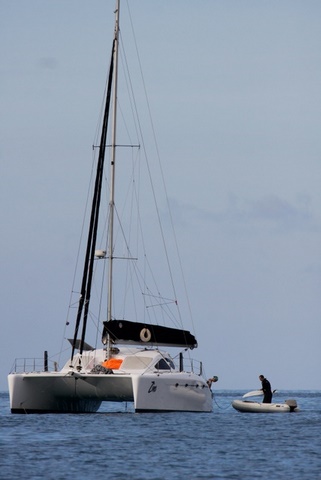 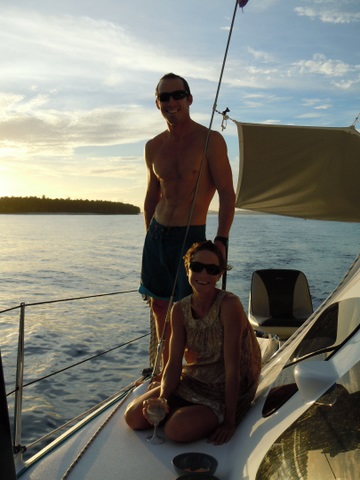 Us + the excellent Egg at Nias. 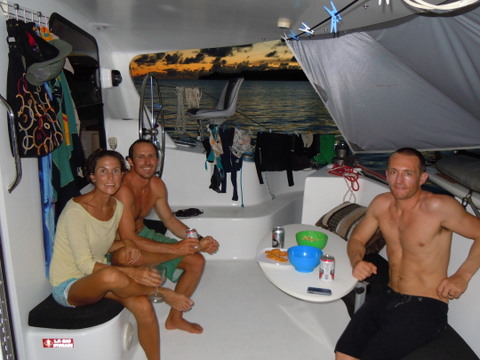 Five things we have learned

1. The surf is not necessarily crowded when there are charter boats around. Some people come to Indonesia not to surf, but to drink beer (e.g., 45 cartons of beer + 11 bogans + 9 days on charter = 10.91 beers per bogan per day and not much surfing the next day).
2. The price the skipper is willing to pay for three 750g boxes of stale Weetbix. [Answer: $US30.]
3. General Indonesian wisdom is that pregnant women should sit or lie down; all of the time. They should avoid walking and never, ever, under no circumstance, surf or jog or carry shopping bags. Indonesians say the skipper needs to get his wife in line.
4. The Telos (i.e., Batu Islands) are a great place to visit to get away from it all, including the big waves hitting the other islands near by.
5. The hospital in Padang is not that crowded, it is not that dirty, the attending medical staff are not that incompetent. The hospital in the Mentawais on the other hand… 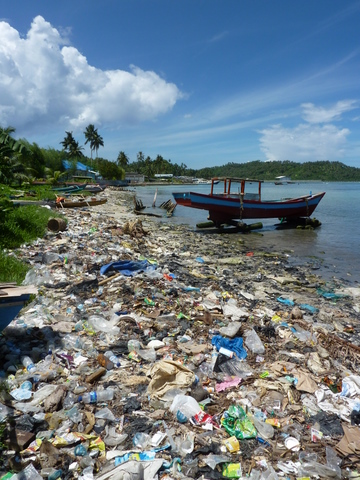 The snake (on the floor) + the snake whisperers (on the roof). 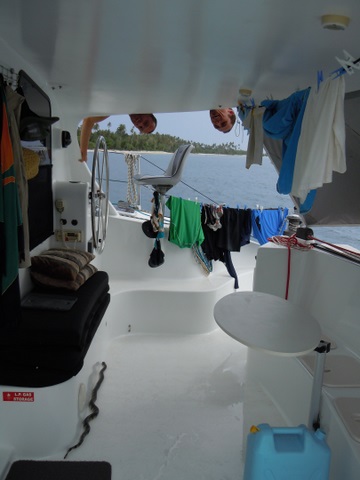 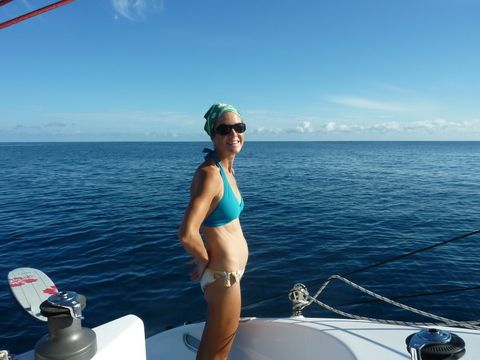 Six of the best bits

1. The (much loved) parasite.
*She is growing.
*She is moving – dancing, rolling, somersaulting.
*She is loving surfing her first season in Indonesia. The skipper is confident he will be able to correct the bad surfing habits she is learning from the first mate.
2. Hanging out with our buddies from home, on holidays aboard the San Souci charter boat.
*The skipper loved surfing with them.
*The first mate loved gossiping with them.
*We both loved tagging along on the charter boat junket, i.e., being taxi-ed to and from the surf by speedboat; photographed; handed fresh towels when coming in from a surf, filled with hamburgers, chicken, chocolate cake, tropical fruit, salad, hot chips, soft drinks, juice. Thanks San Souci.
3. The excellent Egg: On board from Nias to Padang. He was better than a perfect guest. He got to truly “live the dream” as we do and experienced many of the “worst bits”. We hope he had some “best bits”.
4. Pizza Hut cheesy crust pizza: Over the past 15 years, the first mate has been to Pizza Hut four times, each time was in Padang in June and July 2010.
5. The surf.
*Keeping everyone happy: alternating between perfect waves for the skipper and perfect waves for the first mate (and the parasite).
*The skipper was shacked off his brains for two days at one of Indonesia’s best breaks.
*Watching the sunset over one church and the full moon rise over another church while surfing smoking waves, only the skipper and the excellent Egg out.
6. Best item on board in July, in the opinion of:
*The skipper – Multi-purpose sport pant. Spandex. Half thigh length. Black with white racing stripes. Ideal for lounging around on deck, European style.
*The first mate – Leg rope. 2.4 meter x 8 mm. Heavy duty. It enables the first mate to bail her board with confidence in surf ranging from 1 foot to 8 foot. The first mate and the parasite stay safe. Other surfers in the line up beware.

Caught in a fishing net at midnight. 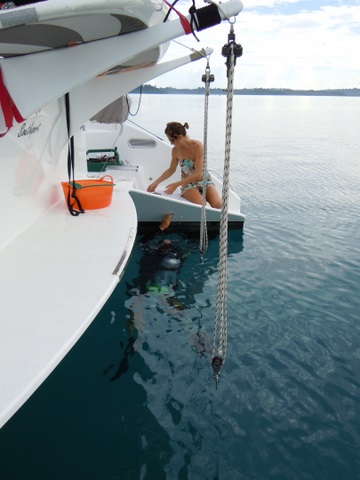 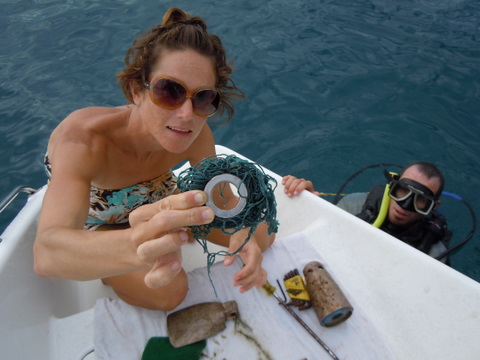 13 of the worst bits

1. Real pirates: They approached Zinc at 8pm in a dug out canoe. They were aggressive. They were drunk. Fortunately, they were unarmed. They bashed their canoe into Zinc’s hulls and jumped on board. They wanted 50 liters of diesel. They did not get it. We screamed. We yelled. We pushed them off Zinc. We pulled up anchor and traveled for three hours to another anchorage.
2. Surfing accident: The first mate missed a late take off, went over the falls and landed on her board mouth first. She screamed. She cried. She spat blood. She was neither tough nor brave. See worst bit #13 for injury details.
3. Nine hospital visits: For treatment of the first mate’s injuries (see worst bit #13). The hospitals were up to 30 hours travel out of our way.
4. Indonesian nurses’ bedside manner: Ten nurses stood around in the corner of an operating theater pushing, shoving, hiding behind each other, giggling, pointing and gawking at the first mate as she lay on a bed half passed out with blood dribbling out of her mouth. The skipper yelled (in Indonesian) at the nurses and ordered them out of the room. The doctor did not dispute the skipper’s order.
5. Caught in a fishing net at midnight: Yep, we ran into an unmarked nylon one inch weave surface net stretching for over 6km set in 100 meters of water in the middle of the channel between Nias and the Batu Islands. It happened on the first mate’s watch. We had to disassemble the starboard propeller to remove the netting that was lodged right up in, and tightly wound around, the propeller shaft. We swore. We cursed. We made derogatory claims and generalisations about the mental capacity of all Indonesians.
6. Caught at sea in a heavy storm: One of the heaviest storms we have experienced so far. It lasted all night but was the worst for three hours. Sustained winds of 35 knots with gusts of up to 42 knots. Rough seas. Lee shore. A sail the size of a folded sarong moved us along at over 8 knots.
7. Nigerian scam-sters: They hijacked the first mate’s yahoo email account. They cracked her password, changed her security question and alternate email address. Yahoo did nothing to prevent, stop or rectify the situation. The first mate’s new email address is jeunessemeldrum@gmail.com. Apologies to those who were spammed.
8. Extremely venomous and potentially deadly sea snake on board: A 1.5m long ringed sea snake boarded Zinc; twice. The first time we shooed it off the back steps. An hour later it walked up the steps, through the cockpit and was about to walk into the lounge/kitchen when we noticed it. It almost scared us to death. The excellent Egg saved the day. He coaxed our visitor, belonging to the same family as the land cobra, back into the sea with a boat hook.
9. Four near collisions: Three different boats in four separate incidents dragged anchor (way, way, way too) close to Zinc. Do not get us started about the anchoring practices of some of the cruising and charter boats in the islands off Sumatra this season.
10. Surfing in a school of rubbish: Plastic bottles and bags, paper, palm fronds, medicine packets, bottle caps, sticks etc. washed through a line up in the Batu Islands. Eyes stung. Cuts festered.
11. Smashed up surf boards: The skipper snapped one board. The first mate put four dings in three boards and snapped one fin.
12. The great Tel-hoax: Two cruising boats + three resort speed boats + four surf charter boats waiting for a wave to work. It did not happen. Everyone (about 65 surfers) missed surfing cranking waves elsewhere.
13. Injuries
The skipper
*Sore knee. From slipping on deck while warding off the real pirates (see worst bit #1).
The first mate
The first mate had a shocker. Karma for showing no sympathy to the skipper re: his injuries last month?
*Dirty “bissle” (i.e., abscess / boil). On back right calf. Ingrown hair turned septic from surfing / swimming in festy water.
*Staph infection. From dirty bissle.
*Busted up face. From surfing accident (see worst bit #2).
-Gash in center of top lip. Two stitches.
-Deformed face. Swollen and bruised. Left side. From eye to nose to jaw to ear.
-Cracked tooth. Bottom left molar. Removal of cracked piece and filling.
*Acute allergic reaction. From the local anesthetic used for stitches and filling. Additional and prolonged deformity of face.
*Paranoia and shame. From Indonesians staring and pointing and laughing at busted up face. [Note: this is not a joke; it really happened, in the Mentawai Islands, in Padang and in Jakarta.]
*Burn. On forearm. From baking.

The skipper + the excellent Egg + the location of the surfing accident. 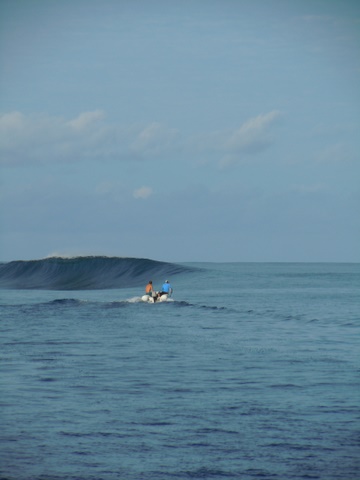 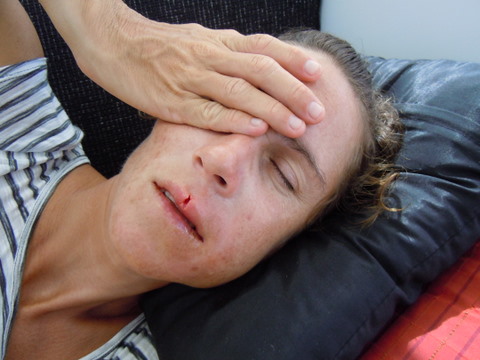 The chipmunk with the white moustache. 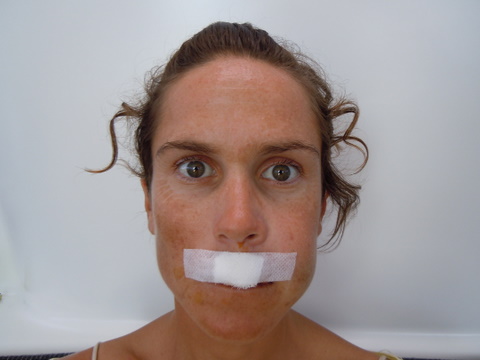 The first mate: sad and sorry for herself; drinking non-alcoholic beer with a straw in Padang. 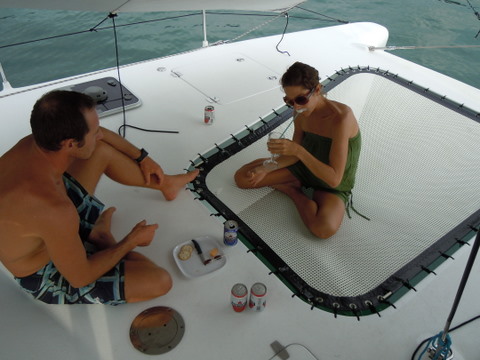 Stitches. Ready to come out. 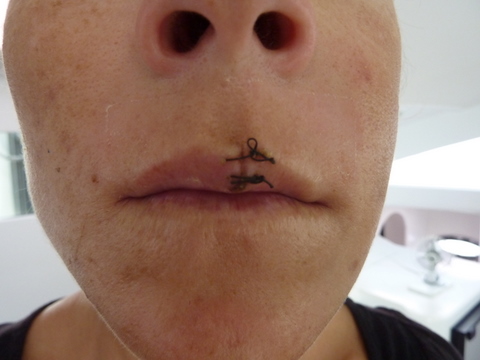 The excellent Egg: promoted to first mate after the surfing accident… 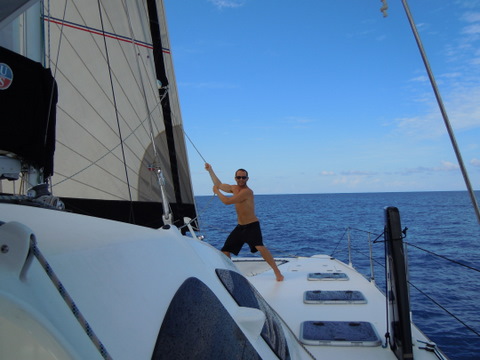 …catching one more wave before pick up by the skipper… 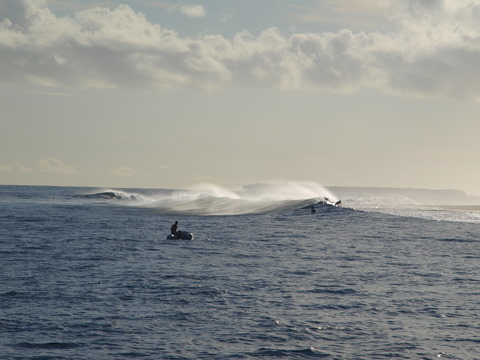 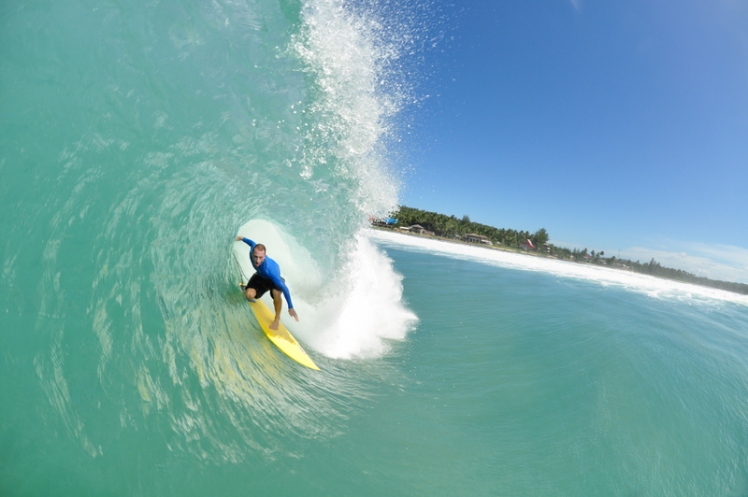 *Pirates numbers one to four – see worst bit #1.
*Pirates numbers five and six were found standing in the dark in our cockpit at 8pm. They wanted to sell us a shell. They almost scared us to death. We did not buy the shell.

The parasite surfing her first season… 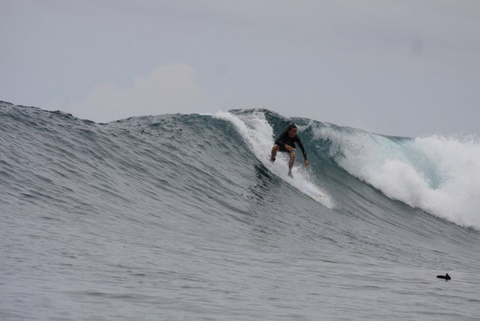 …in Indonesia tucked safely in the first mate‘s wetsuit… 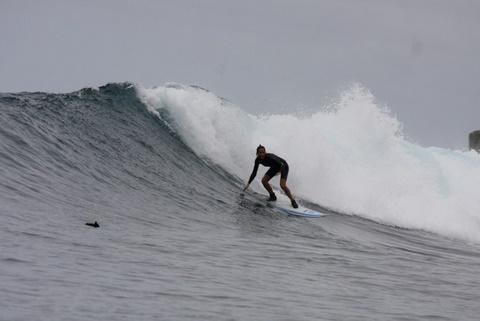 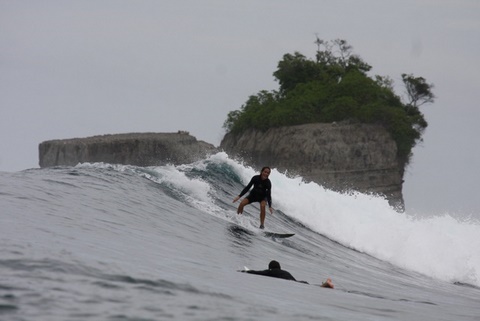 The skipper + the wave. 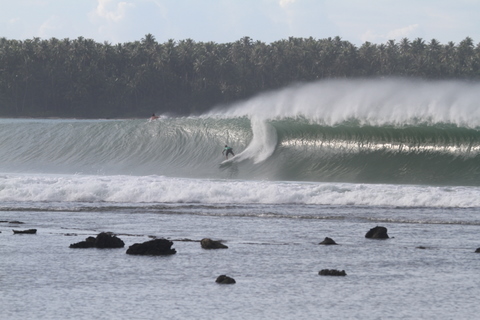 The skipper + the photographer (Pedro Tojal). 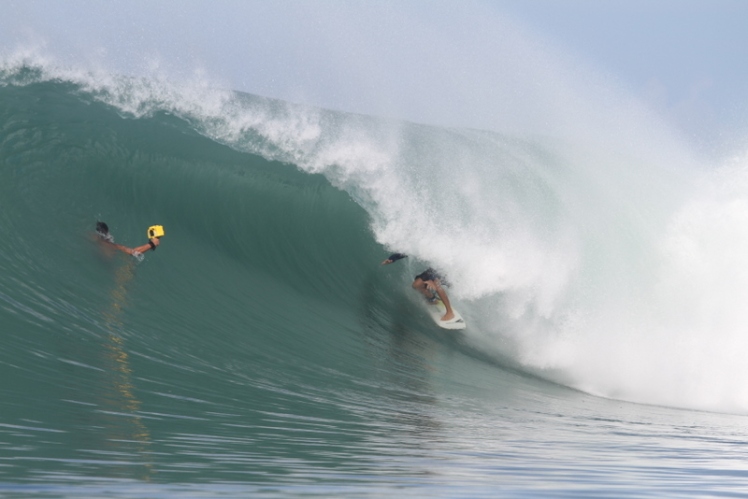 The skipper +… [Photo by Pedro Tojal] 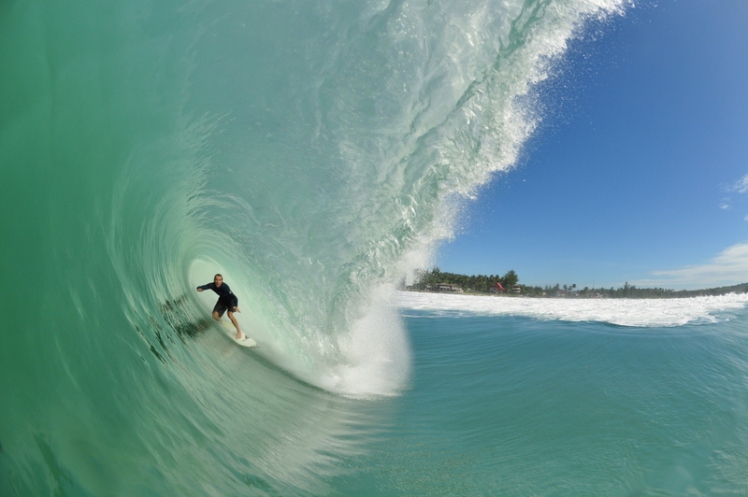 …the awesome… [Photo by Pedro Tojal] 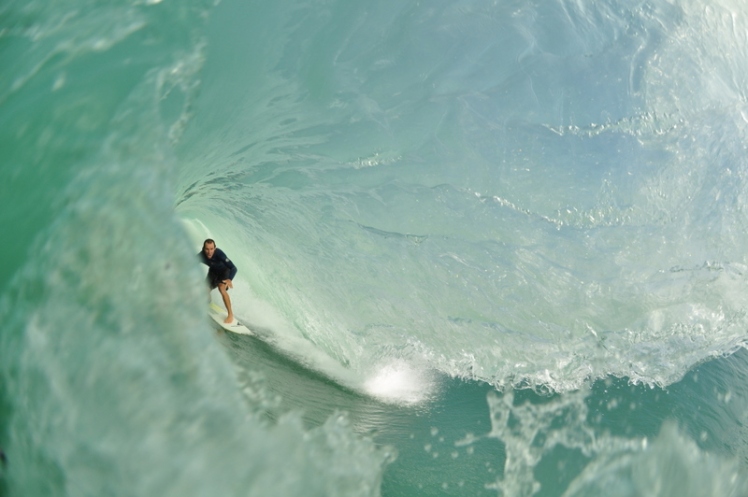 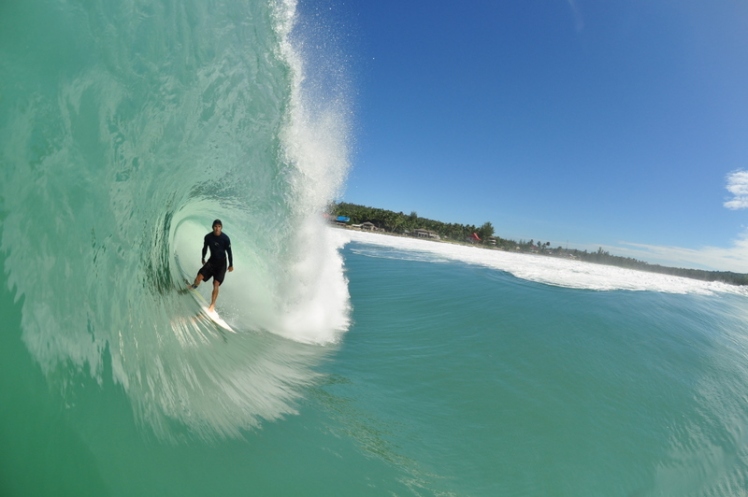 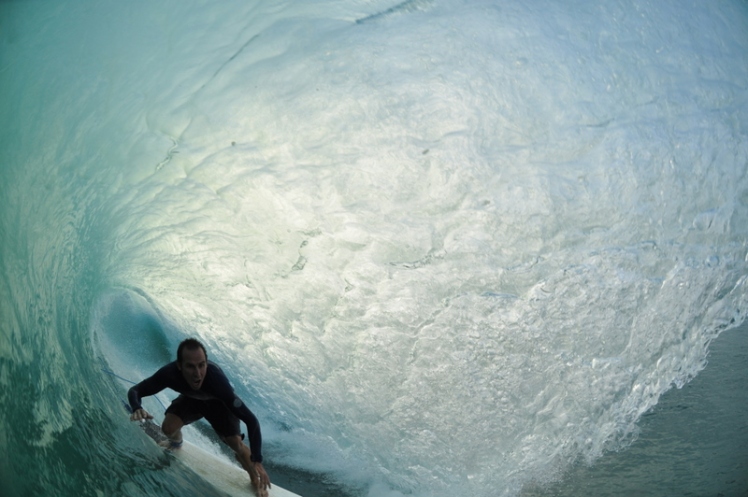 *To kill a mockingbird : Harper Lee (4.5 stars) – Excellent. Better than when I read it in grade 10.
*A short history of Australia : Manning Clarke (3 stars) – The complete story of how and why there are so many bogans in Australia.
*Once upon a time in Beirut : Catherine Taylor (3.5 stars) – The Middle East is a mess and now I know more about why.

*Robinson Crusoe : Daniel Defoe (3 stars) – A sailor’s nightmare. Thank goodness for satellites and EPIRBs.
*Children of the alley : Naguib Mahfouz (4 stars) – Lovely. A soap opera. About families, friends, enemies, vested interests, lofty aims, revenge, deceit, love, hate, passion.
*A short history of Australia : Manning Clarke (3.5 stars) – An accessible history of Australia that does not put you to sleep. A reminder that many Australians have always been bigots – previously possibly even more so than now… just…
*The invisible man : HG Wells (3.5 stars) – The naughty invisible man runs amok. Entertaining. I liked the science fiction behind how the invisible man came to be invisible.
*The spell : Alan Hollinghurst (1 star) – Ordinary. I liked the picture on the cover. It has pretty colours.
*The philosophy gym : Stephen Law (3 stars) – 25 philosophical problems for dummies. Interesting.
*Gone with the wind : Margaret Mitchell (4.5 stars) – Fabulous. A romp. Love. War. Treachery. Loyalty. I adored every 1042 pages of it.
*Complete fairy tales of Oscar Wilde (4 stars) – Beautiful stories without happy endings.